Between the two of them, BMW and Audi make up a huge percentage of the worldwide luxury and performance car markets. Both highly desirable brands with long histories in the automobile industry and motorsports, the two are direct competitors in all of the markets that they operate in. Both companies have their development teams and marketers looking towards the future, but it can be hard for consumers to know which brand to back, and where their future purchase would be best made.

Power and Efficiency are Key

Despite both manufacturers having a strong racing pedigree, many of their future models will focus on efficiency, rather than raw power.

BMW has displayed this interest in efficiency and new technologies, most importantly with the BMW 330e.

This car incorporates a traditional petrol engine with a rechargeable electric motor, providing maximum efficiency for city and highway driving.

Also characteristic of BMW’s future models, is the inclusion of high tech driver aids and entertainment options. BMW offers Bluetooth connectivity to owners’ smartphones, electronic driver aids that make the cars more stable in all conditions, and some models will even include connectivity that allows users to check electric power levels, even when they’re away from their vehicle.

BMW’s goal seems to be the incorporation of their traditional forward thinking in performance and high tech innovation, while bringing in eco-friendly measures that will make their vehicles more compatible with an increasingly environmentally conscious consumer base.

How does Audi Compare

BMW is not the only manufacturer that is scrambling to appeal to new markets and a changing demographic, and Audi has a few of their own ideas that they will be bringing to the world.

One of Audi’s most exciting future offerings will be the plug-in Hybrid Q7. 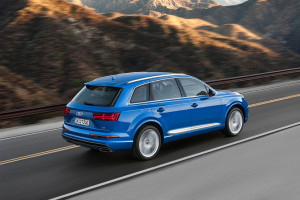 This vehicle is Audi’s response to the need for alternative fuel sources. Much like the BMW 330e, this is a hybrid that combines a petrol engine along with an electric motor. However unlike the 330e, it is a full large sized SUV. The Q7 is one of the largest vehicles in its class, so the fact that Audi will be able to release a hybrid version of this vehicle is hugely impressive.

Not content to simply blend electric and traditional combustion technologies, Audi will bring an array of advanced features, such as the Predictive Efficiency Assistant, a computer based system that will manage power settings. This system will enable the car to intelligently switch between the hybrid power systems.

It is unfair to directly compare the two models. On BMW’s part, the 330e is an economy vehicle that places hybrid power into a more compact design. Audi’s hybrid Q7 is a showcase that displays how hybrid power can be used even in large modern SUVs. Both vehicles are relevant in their own right, and will serve different segments of the market.

One thing that both manufacturers have been able to do is maintain their unique style and sense of innovation, while designing cars that will appeal to a growing market for eco-friendly, luxury vehicles.