BMW vs Mercedes – Marquee Changes For 2016 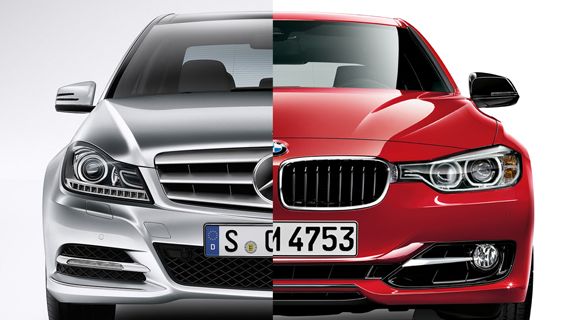 Mercedes and BMW are two highly coveted car manufacturers that directly compete in most segments of the auto market. Both companies are prominent in the luxury segment, while both also provide sporting coupes and crossover SUVs. In any particular model year, they are definitely two companies to watch, and 2016 will be no different. Two model ranges that will be incredibly competitive are the BMW 5 Series and the Mercedes E Class.

Both will offer executive saloons, and both come with prestigious badges and advanced features, but how will the market be able to choose between the two? In some cases it will come down to brand loyalty, but for some buyers, the choice won’t be so clear, as both manufacturers are offering some compelling, yet similar features.

In an effort to bring down weight and increase performance, both cars will be lighter this year. Manufacturer claims show that weight has been reduced by up to 150kg, for both Mercedes and BMW. Mercedes has been dropping weight by increasing the amount of lightweight aluminum used in the manufacturing process, while BMW has reduced weight by using more carbon fiber in areas of structural reinforcement.

Other advances include the use of more electrical components inside the vehicles. Traditionally, auxiliary belts have been used to power things like assisted steering and air conditioning. Both manufacturers are now using electrical systems. This means fewer mechanical parts in the engine bay, and increased space saving. This makes both vehicles more technologically complex, but it also makes them more efficient, which is an important selling point in markets which are becoming more ecologically conscious. Active suspension systems will continue the electric theme, with both manufacturers making use of actuators for stability control, taking the focus off of traditional gas shock absorbers.

Both manufacturers will be offering long wheelbase models. Especially important for executive cars, the long wheelbase will allow for more head and legroom for rear passengers. This could make the 5 Series and E Class more attractive for VIP transportation.

Hybrid engines will also be important for the upcoming model year, right up until the 2017 model year. Mercedes is starting the process of changing out the traditional V6 engines for inline 6 versions. The new engines will be modular which should aid production across the range. In the United States, Mercedes will offer an E Class model which incorporates a V6 paired with an electric motor. BMW will offer a comparable model in the 5 series, with a 2 liter 4 cylinder engine paired with an electric motor for silent operation in specific conditions. This represents a similar focus of both manufacturers as they adapt to trends set by entry level hybrids like the Toyota Prius, and high end all-electric cars like the Tesla.

There’s no doubt that 2016 and 2017 will be exciting for high-end car buyers. As always, Mercedes and BMW will lead the way in popularity, even as Audi attempts to gain more foothold in the US and other markets. The trend of lightweight models that use energy efficient motors, and in some cases, hybrid power delivery, will mean that prestigious motoring is going to become slightly more affordable, even if the price of entry remains mostly the same. Please check out our pre-owned Mercedes-Benz and used BMW’s on our site. We’d be happy to assist you with any information on our current model lineup on these pages.